Team of the Month: June 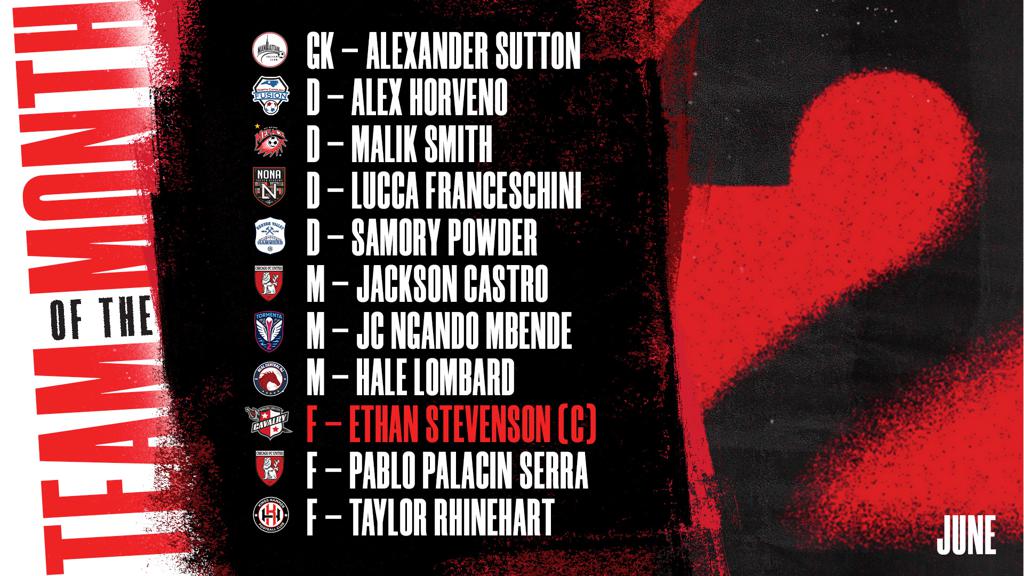 Team of the Month: June

June was full of exciting play from up and down League Two. The players throughout the league put their best foot forward, and have been among the league's best this month.

Sutton was a rock in goal for a surging Manhattan SC team. His month got off to a rocky start, allowing 3 goals against Hudson Valley Hammers in the team's only loss in June. From there on in, it was nothing but dominance from Manhattan's number 1. 24 saves and 3 allowed goals over the last five matches of the month gave him an 89 save percentage over that stretch, and he was still over 80% for the month. A stellar showing for a team with playoff aspirations.

Fusion have been one of the best teams in League Two all season, and Horveno is a major reason why. Three of his four assists this season came in the month of June, where he's played all 90 minutes in every match except a 5-0 win over Wake FC on June 7th. He's helped his side to three clean sheets in that time, and they've got championship aspirations. Horveno's clicking at the right time.

Des Moines Menace has been one of the most consistent teams the entire season. Malik Smith has been a rock for the side, allowing only one goal under his watch the entire month, which included a trip up to Canada. It's now been over six weeks since Smith and the Menace have allowed more than a single goal.

A goal and an assist for Franceschini, in addition to his stellar defensive contributions, helped launch Nona FC to the top of the Southeast division and firmly into the playoffs with games to spare. He scored the decisive goal against FC Miami City to hold the divisional lead on June 11th, and pitched in with an assist against playoff hopeful Florida Elite Soccer Academy in a 3-1 win. It's been a banner month for the Nona defender.

It's almost unfair to categorize Powder as a defender at this juncture. He leads the Hammers in both goals (6) and assists (4). Four of his goals and three of his assists came in the month of June, as Hudson Valley pursued one of those coveted Metropolitan playoff spots. While the team had mixed results, Powder was dominant for the New York side.

June was the best stretch of the season for Tormenta, as they went 5-1-0 with heavy contributions from Ngando Mbende. He chipped in three goals and two assists from midfield and was everywhere for the side as they pushed for a playoff spot. The French midfielder played all but 23 minutes of Tormenta's contests in the month and was a staple of their success.

Lombard couldn't stop scoring in the month of June. Despite only playing a full 90 minutes once in the month, he put up five goals and an assist, averaging only 57.3 minutes between a goal contribution, including three consecutive matches with a goal the week of June 17th. The Lafayette man made his presence felt all month to find himself on this list.

League Two's current scoring leader, Ethan Stevenson hasn't gone a single match without scoring. Seven goals in June to go with two assists have vaulted Brazos Valley Calvary to the top of the Lone Star division and in the driver's seat for a playoff spot. Stevenson has been the most dominant, productive player in the league in June, and he's hoping to keep his streak alive as they head into the playoffs.

Serra capped off a brilliant month with a FIVE goal performance against a reeling Chicago Dutch Lions side. Serra scored a total of six goals across the two-match series that saw Chicago FC United score 15 unanswered goals against the Lions. Serra's the second Chicago FC United player to find himself on this list, and for good reason - the Illinois side was dominant all month.

Rhinehart was electric in all four June matches he played for Kings Hammer, averaging a goal per game and adding an assist in a decisive match against South Bend Lions. That win, in which Rhinehart contributed to both Kings Hammer goals, has given the club a prime chance to potentially win the Valley division to close this season.