USL League Two Team of the Month - May 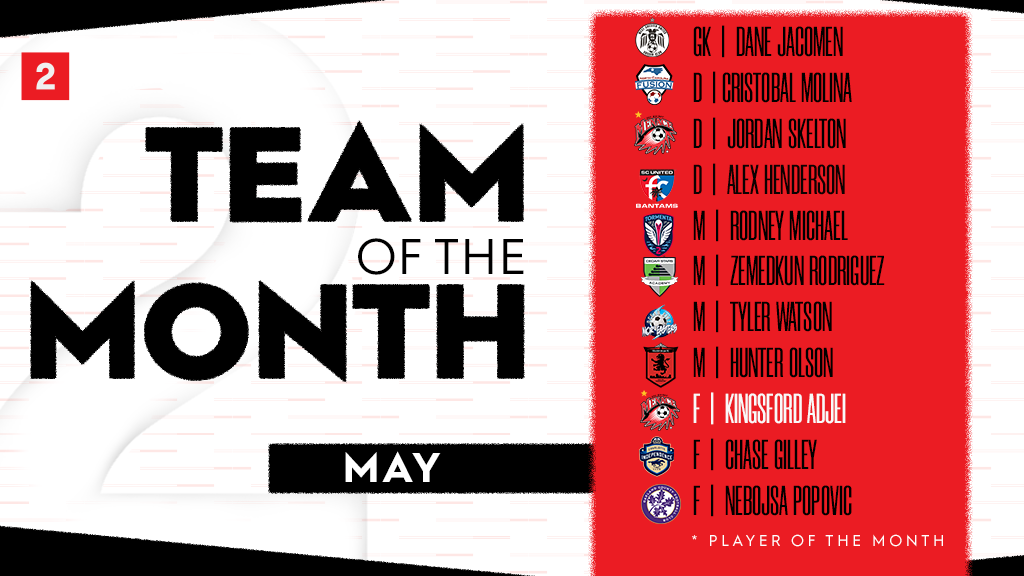 TAMPA, Fla. - USL League Two announced today the Team of the Month for May of the 2021 regular season, with Des Moines Menace forward and League Two Top Prospect Kingsford Adjei named Player of the Month after scoring in all five games the Menace have competed in this season.

The Accra, Ghana native has played a key role in all five Menace matches in the 2021 season. His tactical awareness, combined with his tremendous finishing ability and speed, have translated into an undefeated run for the Menace as Adjei continues to be a playmaker in the offensive half. Fans will want to keep an eye on this striker as he makes a run for the Golden Boot title in the 2021 season.

GK -Dane Jacomen, West Chester United SC: Jacomen’s performance in the first month of Path2Pro play has been nothing short of spectacular. The young goalkeeper has played in seven games logging a total of 25 saves, one of which was nominated for the Week 3 Fans’ Choice Save of the Week. In addition, the keeper has only conceded 4 goals in total in the start of the 2021 season.

D - Cristobal Molina, North Carolina Fusion U23: Molina has been a major presence in the back field playing a total of 270 minutes,  helping to lead the Fusion to a second place standing in the South Atlantic Division. With only five goals conceded in six games, Molina has been a standout for League Two defensive play.

D - Alex Henderson, SC United Bantams: Henderson has been a major standout this season in the SC United Bantams’ defense playing 410 minutes and starting every game for SC United thus far. In addition, Henderson was offered a pro deal with Ipswich Town in English Championship but turned it down to continue his stellar playing career at Georgia State.

M - Rodney Michael, South Georgia Tormenta 2: Before making the jump to Tormenta’s League One roster last week, Michael made League Two his playing ground with five goals scored, including a pair of two-goal performances, over five matches. Michael was also named Tormenta FC 2’s Player of the Month for May and has helped the team rise to the top of the Deep South Division standings. In his short time with the League Two side, Michael has earned League Two Goal of the Week honors and a No. 10 spot in inaugural League Two Top Prospects list.

M - Zemedkun Rodriguez, Cedar Stars Rush: Coming in at No. 18 on the inaugural League Two Top Prospects list, Rodriquez has been a force to be reckoned with in the midfield. The young New Jersey native has recorded four goals in five games played and one assist.

M - Tyler Watson, Ocean City Nor’Easters: Midfielder Tyler Watson has been a nice addition to the Ocean City attacking force as he has logged a total of 362 minutes scoring three goals and absolutely beasting it in the attacking third.

M - Hunter Olson, Toledo Villa FC: The Path2Pro is paying off for Olson as the young midfielder has seen a whopping 450 minutes of play so far in the 2021 season as his squad works to maintain its spot at the top of the Great Lakes Division table.

F - Chase Gilley, Charlotte Independence 2: Gilley has made the most of every minute he has played for Charlotte this season putting up dominating performances in the offensive half. The promising forward has recorded five goals and three assists and continues to be a crucial playmaker for the Independence squad.

F - Nebojsa Popovic, Oakland County FC: Popovic popped off in the month of May netting five goals for Oakland in four games played, including two stunners in the goalapalooza match against Toledo Villa. The power forward has also added two assists to his name.